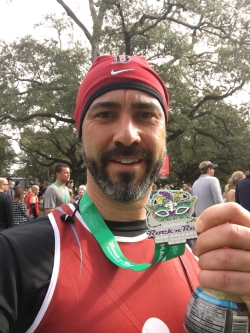 I’ve always liked to run, but typically I was in that 2-4 miles per run realm. A few months ago, I got involved with St. Jude Children’s Research Hospital and decided to run a half marathon and raise some money for the kids at St. Jude.  I literally had not run a timed event since the seventh grade cross country team.  So, I bought a new pair of running shoes to get my marathon training started. Nothing special – Reebok OSR 3.0, retailed at about $110, if I remember correctly, and I started to push my distance out. Throughout November and December, I pushed my average weekly distance out to 20-30 miles, including a few practice half marathon distance runs. I felt pretty good but anytime I got out beyond nine miles or so, my aches would change…blisters were worse and my outer knee pain would last for two days after.

I slowed down a bit around the holidays to recover and when I jumped back into my marathon training in January, the knee pain was worse. I’d have knee pain following just my mid-range runs, and I was getting worried with race day just three weeks out.  By this point, I had easily put 250+ miles on my sneakers but honestly hadn’t realized it since these distances were a new concept to me.  Pulling out my insoles, I found they were a flat disaster with the exception of the even lower points where my feet applied the most pressure.  I was not comfortable trying to break in a new pair of sneakers with only two weeks now before race day, a time when I was planning to scale back my training.

I found a giveaway pair of PORON® Vive® insoles in my office. To be honest, they weren’t even the right size which had me worried, but I needed to try something. I didn’t put them against the foot like they should be used because they were too short by about ¾”. I put them in the shoe and put the stock insole over them, leaving the gap at the heal. I laced up and went out for a short 2 mile run to try them out. A mile out, when I should have been turning around, I was not only thinking about how much more comfortable each step was, but how the contour changes in the road, the slope of the road, and cracks in the pavement no longer bothered me nearly as much. With all this on my mind, I continued on. I arrived back at my starting point 9 miles later and felt better than I could remember following a run! More importantly, over the next few hours I found I had zero blisters; I had zero knee pain. That night I could still walk down stairs, the next day was the same!!

I ran 30 miles total in those last two weeks before race weekend, each one feeling just as good as those during my first run with the PORON Vive insoles. Then I flew to New Orleans for the Humana Rock and Roll Marathon, ran a 5K early Saturday morning and then ran a half marathon the following Sunday morning, finishing the half seven minutes faster than my best practice time, finishing in 1:51:53.