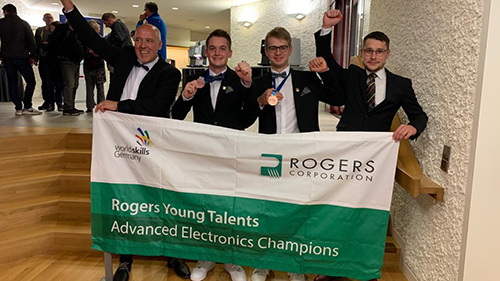 In October, two talented apprentices from Rogers Corporation Germany earned a prestigious top-10 placement for Mechatronics in the 2022 WorldSkills World Championship in Stuttgart, Germany. Jonas Fuhrich and Felix Thaller represented Germany at the competition and competed against top teams from around the world. The team finished tenth overall and took home a “Medallion for Excellence” as recognition for its exceptional work.

WorldSkills is an annual competition for apprentices that brings teams from countries around the world to vie for top awards in various skills-based categories. Rogers sponsored Jonas and Felix at the competition, and the apprentices prepared for their events under the guidance of their Rogers trainers, Johannes Beierl and Johannes Strössner.

To qualify for the World Championships, Jonas and Felix first competed in the German Mechatronics Championship, which took place in 2021. The team proved its talent and took home gold and qualified to represent Germany in the international event.

Out of the 25 teams that competed in the 2022 championships, Jonas and Felix came in tenth. The team scored 718 points out of the maximum 800 during the competition, and in the end, was only 22 points away from the podium. Jonas and Felix earned a Medallion for Excellence for achieving a score above 700 points. The team’s standing and medal demonstrate just how fierce the 2022 contest was between a highly skilled group of competitors.

Many of the top 10 competitors, such as the winners from Japan, spent years at their apprenticeships training exclusively for the WorldSkills competition. During Jonas and Felix’s three-year apprenticeship with Rogers, they worked shifts and were active members of the company in addition to competition training. Because of this added level of difficulty, Rogers is exceptionally proud of the team’s accomplishment.

For more than 20 years, Rogers Germany has had a strong commitment to investing in apprentices and supporting the next generation of talent amidst a rapidly changing market. Sponsoring and training a mechatronics team for WorldSkills is a great way support new talent at Rogers. In return, apprentices bring their skills and knowledge learned from international competition back to Rogers. The team’s win in 2022 is a great validation that mechatronics technician training at Rogers Germany is world-class and can stand up against the best in the world.

Congratulations to Jonas and Felix for their hard work and accomplishment at the WorldSkills World Championships! 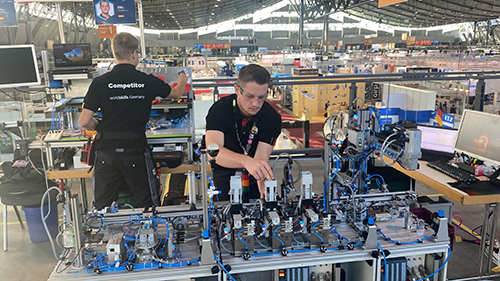