In the world of electronics, heat can severely shorten the lifetime of a device. It is therefore necessary to move heat away from vital components such as chips, LEDs, and inverters to maintain optimal performance without shortening the lifetime. There are many different thermal management techniques that can be utilized by engineers depending on the devices heat density, space constraints, and cost. Some of the general ways to move heat from a system: air/liquid- natural convection, air/liquid- forced convection, solid state, and 2-phase cooling.

Solid state coolers are semiconductor devices that move heat from one side of the semiconductor to the other through the Peltier effect. They are lower in efficiency compared to other cooling methods and they are limited in their lifetime due to material breakdown over time. However, they are used when a device requires no moving parts or liquids, has a relatively low heat density (<150W/cm2), or is in need of a compact cooler. 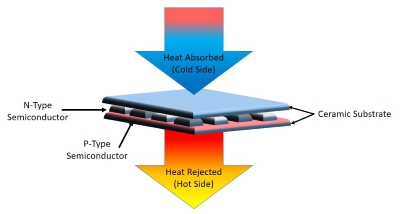 The heat transfer coefficient, h, is the proportion coefficient “between the heat flux and the thermodynamic driving force for the flow of heat” (or the temperature difference), and is typically in W/m2K (however, it can also be defined over an area of cm2). It is used to calculate the heat transfer of the system and is useful in comparing the effectiveness of various cooling methods. Free convection gasses typically have an average h value of 10 W/m2K (0.001W/cm2K) while water has a value of around 1000 W/m2K (0.1 W/cm2K). Water has a much higher heat transfer coefficient, however, its use in natural convection cooling is not as common in electronics as air for obvious reasons. One method typically employed in lower power electronics such as LEDs and some PCs is use of a finned heat sink. A heat sink is typically a thermally conductive material such as aluminum or copper, the fins increase the surface area to which heat can dissipate into the surrounding air. While this method of cooling is not very effective compared to liquid cooling, it very inexpensive. When every penny counts, like in the case of municipal LED streetlights, this cooling method can be good enough.

Forcing the air or liquid over the surface can have up to a 10x better heat transfer coefficient compared to natural convection. These methods are commonly employed in computers and higher heat density electronics applications. Forced air convection typically employs the same finned heat sink approach as natural convection air cooling, but it also utilizes fans to move air over the fins. This method of cooling is inexpensive, but the fan can increase power consumption of the electronic device (which is detrimental to battery driven electronics).

Liquid forced convection cooling can consist of moving the liquid directly across a heated surface (this type of submersion cooling is being used in the electronics industry for small and stand-alone data centers), or through a heat sink in direct contact to the heat source. The internal design of the heat sink plays in important part in how well the heat sink can remove heat from the heat source. For example, a simple design (a pipe through the middle of a heat sink) is going to be much less effective at removing heat than a heat sink with an intricate internal structure such as a fin or pin/fin due to the difference in the flow dynamics of the fluid between the two designs. However, it is going to cost significantly more for a heat sink with an engineered internal design, which can be a factor for some device designs. Finally, forced convection liquid cooling will add complexity to a system since it will need some sort of a pump system to circulate the liquid. While liquid forced convection is quite a bit more effective, the added cost and complexity of the system can make it a less appealing option for some electronics applications.

This type of cooling uses the phase change properties of a fluid to provide an even higher potential to remove heat from a system. As a liquid boils, it can absorb significantly more heat than through just convection. The below graph gives a good representation of how this cooling method compares to liquid and air forced convection cooling, as well as liquid natural convection cooling: 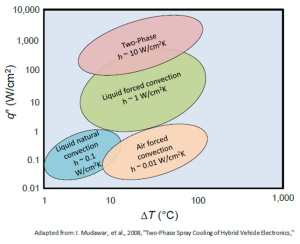 2-phase liquid cooling can be either actively pumped or, more commonly, passive. For example, heat pipes are a common passive 2-phase cooling method used for electronics. They effectively move heat away from temperature sensitive areas such as chip. They can utilize a number different liquids, are relatively inexpensive, simple, closed designs that can be made into a number of size and form factors depending on the electronic device’s design constraints.

The design for a passive 2-phase cooler can be as simple as a gravity driven thermosyphon or as complex as capillary pumped loops or pulsating heat pipes, but the cost will reflect the complexity. There is a reason that heat pipes are common and other passive 2-phase designs are less accepted.

Other methods of actively pumped 2-phase cooling employed for electronic devices include submersion cooling in a low boiling point dielectric fluid (similar to the forced convection cooling method mentioned above for small data centers, but with a low BP liquid and a condenser built into the unit), spraying a dielectric fluid directly on a heat source or indirectly through a heat sink, or directing fluids through channels in circuit boards for direct contact cooling of electronics components. All of these methods are very effective for removing heat from an electronic device, however, they are also very costly and introduce a high level of complexity.

Heat management in electronic devices is an important factor in the design of the device, and there are a number of methods available for engineers to employ to remove heat from sensitive electronic components. With devices getting smaller and faster, the heat density of electronic components is rapidly increasing, driving a demand for more efficient, less expensive thermal management solutions.